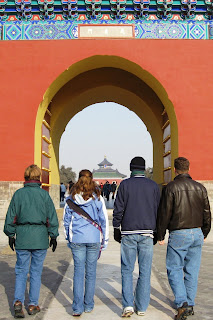 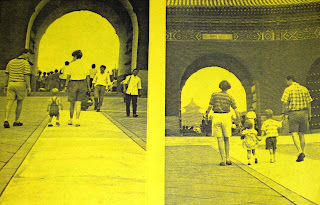 Our family will be moving 10,000 miles across the world very soon. We’ve spent the past 11+ years in East Asia. We’re beginning to experience a lot of “last times.” You know, the last time to go to this place, or to minister to this group of people, or whatever. The pix are of our family, taken in the same location in 1991, 1994, and 2007.

Transition stress – good and not so good – is very real. I’ve done briefings and debriefings for years. I know all the stages (Involvement -> Leaving -> Transition -> Entering -> Re-engagement). But just because you know something doesn’t mean it doesn’t affect you at a heart level. For me I notice it when my mind won’t turn off at night, constantly churning between big issues to minute details. It wears me out and forces me to new places of dependence.

Anyway… I’ve been meditating on Daniel’s life lately. Way before he went to the lion’s den, we’re told that Nebuchadnezzar, king of Babylon (modern day Iraq), came to Jerusalem and beseiged it. This happened in 605 BC, when the Chaldeans were feared because of their intense, heartless cruelty to prisoners of war. Not much has changed since then with the Chaldeans. War still stinks. People are still afraid of them.

“The Lord,” we are told, “gave Jehoiakim into Nebuchadnezzar’s hand.” It was God’s plan all along – a divine plan of dislocation resulting in human hardship. After the king plundered Jerusalem, he ordered his officials to bring in some Israelites from nobility – young, handsome men – to teach them the literature and language of the Chaldeans. They were to be Babylized for three years, then enter the king’s service. Nice leadership development plan.

What strikes me is how Daniel (renamed Bel-teshazzar, after the pagan god Bel) responds. As a youth, most likely stripped from family, friends, and the life he knew and loved, “Daniel resolved not to defile himself.” What devotion! The rest of the book of Daniel reveals a man who seemed able to embrace the most extreme external challenges, even bearing a name honoring a foreign god, because his heart was fully devoted to the Lord. There is a line from a play in which Daniel exclaims: “In every way that is unimportant, let them make us Chaldeans.” Daniel understood “the importance of knowing what’s unimportant.”

That is extreme self-leadership. That is the way I want to live – wholly devoted in the midst of divine displacement. Maybe it’s not the most heroic thing, but a life lived well in smaller sufferings still raises Christ as King among the nations.

One reply on “Embracing Divine Displacement”

Ken, great post and awesome pics of your fam through the years. Your labor has not been in vain. Just put you as link to the http://www.stintleaders.blogspot.com. Woudl love to have you write a guest post to stint leaders if you ever are not too busy.