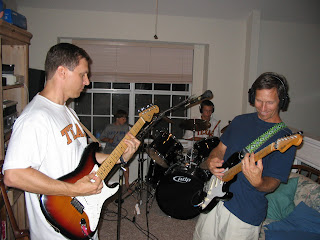 Ann and I have been dealing with international shipping companies, talking to export car brokers to deregister our Kia (for cash back from the Singapore government), and trying to figure out how to transport a different used car we bought via auction from Dallas to Houston, Texas. All in a day’s work for a family in transition. Of course there’s no closure in any of this, which is why God gave us electric guitars.

That’s me and buddy John Burke jamming. Years ago we were in a rock band – MYST – in high school. John played drums, I played keyboards. Neither of us played guitar.

Now we’re both involved pretty heavily with people everyday. And we both have Fender Stratocasters. A Strat is a piece of artwork you can wield. Its design remains fundamentally unchanged since its birth 50 years ago. Plug it in and you might hear anything from mellow jazz to overdriven blues to pop rock to scorching, juicy distortion.

I’ve played guitar for over 25 years now. But I just began learning electric guitar a few years ago. There’s one key difference between playing an acoustic guitar and strumming a Strat. That difference is POWER. Like most new electric players, in the beginning I used way too much power. Distortion sounds cool and appears to cover bad technique, at least for awhile. Too much power grates on people’s ears, though. Mature artists use far less distortion and power, and when it is used, it’s used well – for support, for accent, to build a crescendo, or to punctuate with a solo line.

The same seems to be true of leadership. Many young leaders try to use too much power – to drive the sheep, to solve problems, to get people in line, to make things happen. But too much power grates on people. Seasoned leaders seem to have a knack at playing in tune, on time, and using the right amount of power the situation demands in order to support, accent, build or punctuate.

Lesson for us: Just like playing a fine instrument, the art of leadership requires intentional practice and mastering the fundamentals of bringing power under control.

One reply on “Power Under Control”