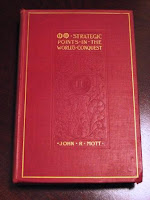 From whom did you first hear the terms Win-Build-Send? A pastor? Bible study leader? CCC staff member? Dr. Bill Bright?

I knew these roots ran deep, but I didn’t know how deep until I came across this story….

At the end of his first year in college, John had tired of religious nuts trying to convert him. He transferred to Cornell, an Ivy League school he felt would give him freedom from such people. When he arrived to settle in, who greeted John and helped him with his bags? A group of Christian men.

These guys kept inviting him to their Christian meetings. Finally John relented, just to get them off his back. He snuck in the side door of the meeting room, just in time to hear the speaker, a British sports hero, cry out: “Young man, are you seeking great things for yourself?!” John stood paralyzed, wondering if it was the speaker – or perhaps God – who was speaking to him. “Do not seek them! Seek first the Kingdom of God!”

After a sleepless night, the next morning John tracked down the speaker. He learned that J.E.K. Studd, along with his brother C.T., were famous athletes who were walking away from sports contracts and a family fortune in order to serve as missionaries to China. John was pierced to the heart when he understood the reason for the Studds‘ commitment was due to Christ’s sacrifice. He repented and began to follow Jesus wholeheartedly.

Though Nobel-prize winner John Mott never became a foreign missionary himself, over the next 60 years he would travel round the world multiple times mobilizing student-led movements on behalf of the YMCA and Student Volunteer Movement. One amazing journey lasted from July 1895 to April 1897, covered 60,000 miles and resulted in a fascinating book entitled Strategic Points in the World’s Conquest.

I have in my hands right now an 1897 edition of Mott’s travelogue, where he writes:

“The object of the [World’s Student Christian] Federation is most inspiring. It is nothing less than the uniting of the Christian forces of all universities and colleges in the great work of winning the students of the world for Christ, of building them up in Him, and of sending them out into the world to work for Him.”

Yep, you heard it here first.

Did you know?
The Student Volunteer Movement recruited over 100,000 students to the task of world evangelization between its founding in 1886 and World War II.

One reply on “The Deep Roots of Win-Build-Send”