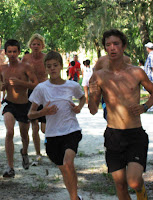 The other reason we remember September 11 around our home is that it is Travis’ birthday. Today marks 18 years for him. Here’s what I wrote on his card:

Congratulations! Today marks a rite of passage. In our society you legally become a man. I am proud as your earthly father to have a son like you, as you have been becoming a true man for many years now.

For 18 years I have prayed the same prayer – that you would grow in WISDOM and STATURE and FAVOR with GOD and with MEN. By any standard – worldly and spiritual – God has clearly answered this prayer.

Travis, you are a blessing to me, to Mom, to our family and to the world around you. May your life always be a crossroads – a line in the sand inviting others to step over that line and join you in becoming true heroes.*

Proverbs 15:20 says a wise son makes his father glad. This is true. Have a wonderful day and know that I love you.

*P.S. For those not versed in Texas history: Legend tells us that Col. William Barrett Travis, one of the few commissioned soldiers at the fall of the Alamo, upon realizing that the 180 men there could not hold out much longer against Santa Anna’s 5,000 troops, drew his sword and etched a line in the sand. He then invited any volunteers who would fight for Texas’ independence to step across the line. All others were free to leave, after which the gates would be locked and they would fight to their death.

Every man but one stepped across the line.

HAPPY BIRTHDAY TRAVIS! September 11th is a special day for me too. I received the best birthday present ever–MY first child, my only daughter, was born on my 29th birthday–September 11th, 1994.