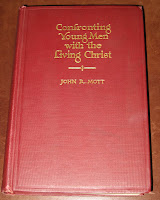 Last week Ann and I hosted a long-time friend in the journey for dinner and languishing conversation. Holly Sheldon brought with her two gifts, both first-edition books written by missions statesman John R. Mott. I have been captivated by some of Mott’s observations and inquiries on the state of Christianity among college students in 1923. His answers mirror the same conversations I find myself in week after week, seeking to help others differentiate between Christian ministry activity and Christ-centered movements of God. If you’ve found yourself asking those questions, read on.

I have searched in vain for a purchasable or downloadable copy of Mott’s Confronting Young Men with the Living Christ. Here’s a morsel:
“If I might share with you my dearest wish it is that by the time I come to my old age I may have so brought all thoughts into obedience to His marvellous captivity, that whenever my mind comes out of unconsciousness into consciousness it will revert naturally and inevitably to Jesus Christ.
“Along the pathway of the realization of this vital objective, the confronting of men and boys with the Living Christ, has come to the largest and most enduring fruit…. Expressed otherwise, it may be stated with confidence that this has been the secret of the [Young Mens Christian] Association’s most far-reaching, most deeply penetrating, and most transforming influence in the lives of men and of nations.
“Mine, as you know, has been a traveling life. It has taken men first and last to possibly fifty different countries, to virtually every one where the Association is planted, and to most of them again and again. There is a certain advantage in having the opportunity to pass from land to land and to revisit at intervals the same fields. It enables one to observe contrasts and trace tendencies. With this as a background let me ask one or two questions.
“Why is it that when I visit one country the Association reminds me of nature in springtime, with life bursting from the ground; whereas in another country, possibly an adjoining one, I receive no such impression of vitality? It may be that in the latter case the Association has larger numbers, greater financial resources, and a more elaborate organization, but it is not yielding so great a spiritual fruitage. What is the explanation? In the former case, the leaders… are seeking to fix the attention of men and boys upon Christ Himself and to influence them to follow Him; in the latter case the leaders have lost their perspective and have become absorbed with means rather than the vital end.” Emphasis mine.
Question for aspiring leaders: Toward what vital objective are we leading others?

I was thinking of 2 other categories that factor into the question you posed: Hungry/Full, and Hurting/Encouraged. I’ve noticed personally that when I’m hungry for the Lord to work, and encouraged by Him, then that vitality and spring-like quality abound. On the flip side, when I’m full of my own desires or even full from seeing him work, and hurting spiritually, I’m as free as a sunken ship.

I confess, I didn’t read this post yet. Erik and I just wanted to say that we think your profile picture is stellar! Erik wants to know if it was taken in Singapore. He insists that it is because “there are buildings.” Naturally this was followed by a sarcastic comment from me about how only Singapore has buildings.

We wish we could have been at that Cochrum/Sheldon dinner. We’re missing the presence of the three of you in our Singapore lives.